The DOMINO VGS provides on-site pre-treatment of hydrocarbon wastewater. This system has been developed to continuously and effectively remove hydrocarbons from waste water.

The Domino VGS is an oil water separator developed to effectively remove free oil, grease and suspended solids from wastewater. The Domino VGS operates by ingenious control of both fluid velocity and pressure. These forces gently coax non-emulsified impurities from water by allowing high density contaminants to fall into a sludge retaining area at the bottom of the vessel, and oil droplets and low density suspended solids to rise to the top of the vessel. The oil and suspended solids then drain of into a waste tank .
Acclaimed by major water authorities around the world as "the best technology of its kind", the Domino VGS can be used as a stand-alone separator or to supplement the performance of existing systems. Because it stays clean it maintains its performance!

Performance: Due to its ingenious design the Domino VGS is capable of continually meeting the performance standards set by the EPA and other regulatory authorities.

Suspended Solids: Low density suspended solids are encapsulated by the oil and progress to the top of the Domino VGS for discharge to the waste tank. Heavy solids settle to the base of the unit and are removed from the system by the way of a control valve.

Flammability: The turbulent flow principle of the Domino VGS ensures the vapour content of the wastewater being treated is always reduced to safe levels.

Construction: By utilizing a vertical cylinder design the Domino VGS requires far less floor space compared to other Maintenance Unique design features enable quick, on-line cleaning of the unit; a feature only found on the Domino VGS. The need to remove plates and use high pressure jets or chemicals to clean conventional separators has been eradicated. 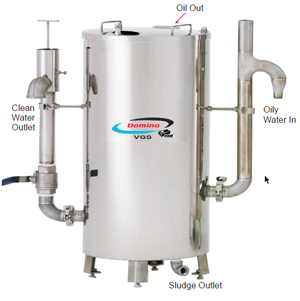